NASA scientists reported today that dust in the skies over Opportunity is thicker than ever seen before from the surface, and the storm that is raising the dust is on the verge of becoming global. Moreover, the storm rose over a couple days, unusally quickly for such events. While the baseline of past storms’ behavior is not lengthy, scientists are expecting the storm will last several weeks to perhaps a couple months.

Opportunity has ceased all scientific operations, and according to project manager John Callas (JPL), it has probably dropped into deep-sleep mode. This energy-saving routine is nothing new, he says. The rover has been doing this on mission control’s command every night for the past several thousand days.

While blocking sunlight almost totally over Opportunity, the storm has had a thermal blanketing effect, he says, keeping night temperatures warmer than they would be under clear skies. The scientists stressed that Opportunity can likely survive, even if the storm takes weeks to clear.

Also, unlike a dust storm on Earth, where dust can accumulate thickly enough to hinder vehicles, Mars dust particles are smaller in size and tend to blow off the rover’s solar panels and even the optics. The scientists foresee no mobility problems when the rover returns to operations.

To monitor the storm NASA is using its orbiters and the Curiosity rover. From orbit, the Mars Reconnaissance Orbiter’s Mars Color Imager (MARCI) and Mars Climate Sounder (MCS) are the main contributors, while on Curiosity, the Mastcam and Rover Environmental Monitoring Station (REMS) are its main contributors.

The graph below shows atmospheric opacity throughout the martian year, starting with Mars Year 26 in April 2002. The red trace, for Mars Year 28, shows the 2007 global dust storm at right. 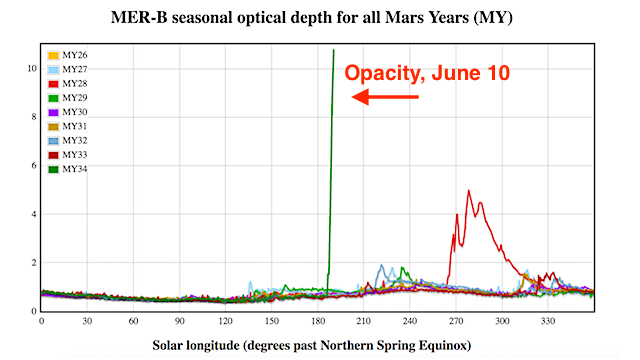