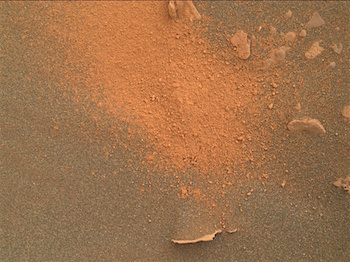 Sol 2081, June 13, 2018, update by MSL scientist Roger Wiens: The final several sols of Curiosity’s drill activities at “Duluth” are devoted mostly to imaging and to analysis of the pile of drill tailings that are dumped on the ground after the delivery to the instruments.

Some people think dirt is uninteresting. Shortly after the Curiosity rover landed in 2012 I was asked to give a special talk to a very distinguished group of people. The slides had to be prepared a couple of weeks in advance and were sent from my director’s office to be reviewed by handlers in the state where I was to give the talk. Those first days of the mission were breathtaking, and my presentation included the video of the landing, taken from the MARDI camera, mounted on belly of the rover, as it descended. In that scene, the dust gets kicked up by the sky crane’s rocket engines as the rover nears the ground, and… [More at link]