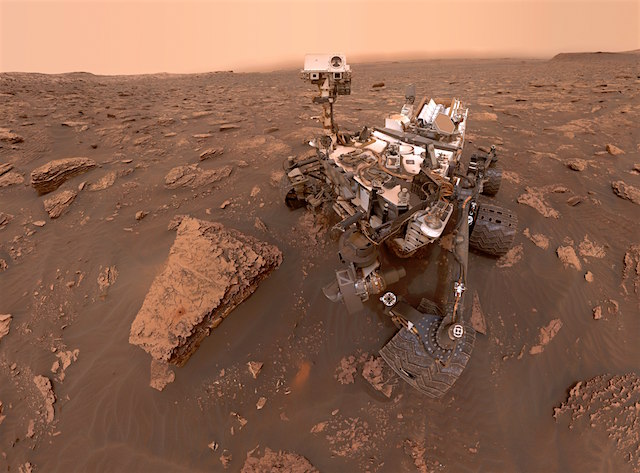 A storm of tiny dust particles has engulfed much of Mars over the last two weeks and prompted NASA’s Opportunity rover to suspend science operations. But across the planet, NASA’s Curiosity rover, which has been studying Martian soil at Gale Crater, is expected to remain largely unaffected by the dust. While Opportunity is powered by sunlight, which is blotted out by dust at its current location, Curiosity has a nuclear-powered battery that runs day and night.

The Martian dust storm has grown in size and is now officially a “planet-encircling” (or “global”) dust event.

Though Curiosity is on the other side of Mars from Opportunity, dust has steadily increased over it, more than doubling over the weekend. The sunlight-blocking haze, called “tau,” is now above 8.0 at Gale Crater — the highest tau the mission has ever recorded. Tau was last measured near 11 over Opportunity, thick enough that accurate measurements are no longer possible for Mars’ oldest active rover.

For NASA’s human scientists watching from the ground, Curiosity offers an unprecedented window to answer some questions. One of the biggest is: why do some Martian dust storms last for months and grow massive, while others stay small and last only a week?

Curiosity, he points out, plus a fleet of spacecraft in the orbit of Mars, will allow scientists for the first time to collect a wealth of dust information both from the surface and from space. The last storm of global magnitude that enveloped Mars was in 2007, five years before Curiosity landed there…. [More at link]