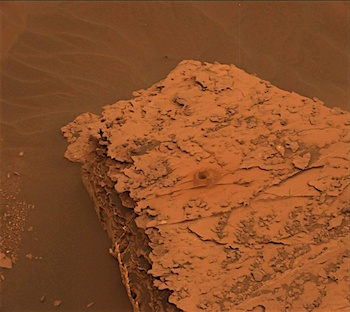 Sols 2088-89, June 20, 2018, update by MSL scientist Mark Salvatore: Over the past week or so, Curiosity has experienced increasingly dusty conditions in Gale crater. Unlike her older cousin Opportunity on the other side of the planet, Curiosity is not solar powered and, therefore, doesn’t suffer from the same power issues resulting from the darkening skies that Opportunity does. That allows Curiosity to play more of an active role in monitoring this dust storm from the ground and collecting important information to help scientists understand the evolution of such a weather phenomenon. (…)

One really cool observation that will be made in today’s science plan is a ChemCam LIBS observation of… well… THIN AIR! The idea is to target the ChemCam laser into the dusty martian air. By observing the amount of dispersion of the laser pulse, the team will be able to make some really cool observations and estimations of atmospheric dust abundances. This is equivalent to shining a laser pointer into the sky during a foggy day, or in a dusty classroom. It’s a new tool available to Curiosity thanks to some really ingenious planning by the scientists and engineers, and today is the first day that we will make this observation, so stay tuned! [More at link]