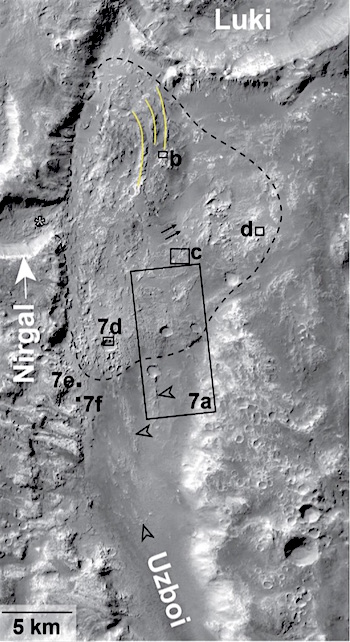 [Editor’s note: From a paper by Sharon Wilson and three co-authors recently published in the Journal of Geophysical Research.]

One of the most impressive landscapes carved by liquid water on Mars occurs in northwestern Noachis Terra and southern Margaritifer Terra. Uzboi Vallis, Ladon Valles, and Morava Valles are a sequence of valleys that formed as water flowed into and out of depressions in the landscape, stretching from the southern highlands to the northern plains.

Understanding the role of water in this region of Mars — in particular the period in which it occurred, and the length of time it persisted on the surface — provides important information about past climate conditions. Recently acquired high‐resolution images and topography were used to describe the nature and origin of a previously unrecognized mound of material on the floor of Uzboi Vallis.

The mound of material in Uzboi is adjacent to the mouth of Nirgal Vallis, Uzboi’s largest tributary. The lower part of the mound may have formed by a combination of material related to impact cratering, water‐driven movement of sediment, or landslides. The upper part of the mound, however, is a fan‐shaped deposit that formed as water flowed out of Nirgal and deposited sediment into Uzboi. Thus, the surface conditions in this region of Mars may have been hospitable for life relatively late in Martian history. [More at link]