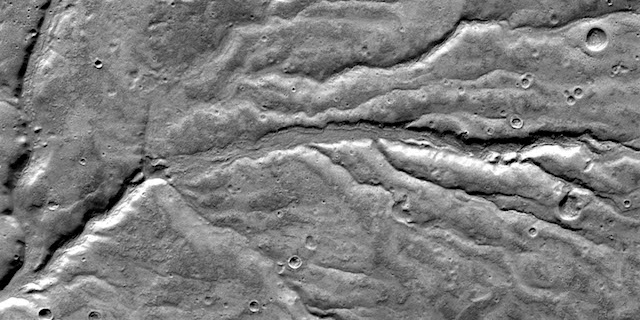 Astonishingly similar: valley networks on Mars bear a strong resemblance to those in terrestrial arid landscapes. Researchers have been able to demonstrate this using the angles of river valley branches. From this, they infer that Mars had a primeval climate in which sporadic heavy precipitation eroded valleys.

The surface of Mars bears structures that resemble river networks on Earth. Scientists therefore assume that there must once have been enough water on the red planet to feed streams that incised channels into the subsoil.

For years, however, researchers have debated the origins of this water: was it rainwater that caused streams and rivers to swell? Or did ice in the soil melt due to volcanic activity, and seep out to form rivers? Each of these scenarios leads to a completely different conclusion about the climatic history of the red planet.

A new study [published in Science Advances] now suggests that the branching structure of the former river networks on Mars has parallels with terrestrial arid landscapes. This has been demonstrated in a recent paper published in Science Advances by physicists Hansjörg Seybold and James Kirchner from ETH’s Institute for Terrestrial Ecosystems, and planetary scientist Edwin Kite from the University of Chicago.

Using statistics from all mapped river valleys on Mars, the researchers conclude that the contours still visible today must have been created by surface run-off of (rain)water. They therefore exclude the influence of groundwater or melt water from the soil as a dominant process for shaping these features. [More at links]