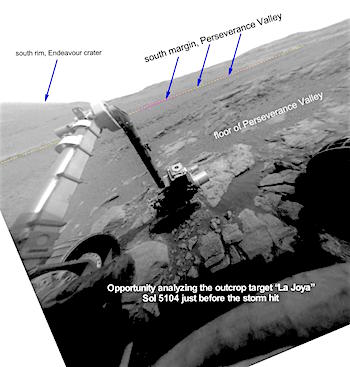 Sol 5135, July 5, 2018: Rover Field Report by Larry Crumpler, MER Science Team & New Mexico Museum of Natural History & Science: Opportunity is hunkered down in the floor of Perseverance Valley here on the inner wall of Endeavour crater waiting out the global dust storm of 2018.

The outcrop currently being investigated, “La Joya”, is exposed sitting in the floor of Perseverance Valley and is an anomalous basaltic and vesicular petrology. Meanwhile the north and south walls of the valley appear to be rather clast-poor impact breccias which we believe may not be from Endeavouur crater, but instead represent a “pre-Endeavour:” lithology. And Perseverance Valley seems to have north and south walls that line up with very noticeable faults (“Socorro” and “La Bajada”) cutting through the crater rim.

• MRO/ HiRISE images acquired over the last week are mostly unusable except for the south pole and some high northern latitudes.
• MRO/MARCI reports that dust was still lifting in several locations, so the storm is not abating yet.
• Current assessment of the present storm by the Martian weather experts suggest that this storm is more like the 2001 storm than the 2007 storm. In that storm opacity (tau) did not drop below 2.0 (an acceptable number for Opportunity) until about 80 sols (Mars days) after the storm started… [More at link]