Hypanis Valles: More likely a delta than a glacier 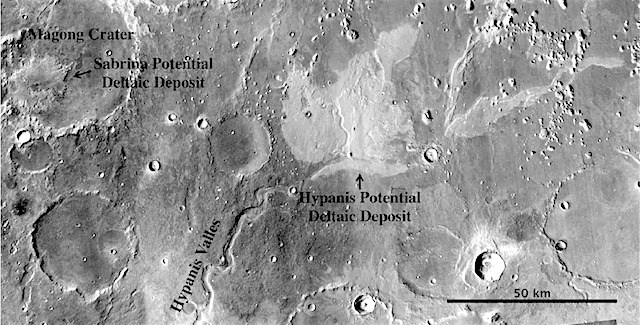 Is Mars’ Hypanis Valles a glacier? A new study says no.

A recent study [published in Icarus] from a team of scientists led by Jacob Adler of Arizona State University explored a unique area of scientific interest on Mars called Hypanis Valles. Considered a potential landing site for NASA’s Mars 2020 rover and ESA’s ExoMars 2018 rover mission, Hypanis is a large, fan-shaped sedimentary deposit on Mars approximately 150 meters tall and 60 kilometers wide. It has been hypothesized whether a major lobe of Hypanis Vallis could be home to a rock glacier. Adler’s team used satellite images to rule out that option. Instead, they found compelling evidence that these layered, fine-grained deposits were a massive delta.

Because of the lack of high-enough resolution satellite data until recently, scientists were uncertain of which landforms composed Hypanis. For the major lobe of Hypanis, the main candidates were a delta, mudflow, or alluvial fan. For the second, dubbed northern lobe, which the team hypothesized was formed by a different mechanism than the major lobe, one of the main landforms considered was a rock glacier. Interpreting the geomorphology and silt compositions, Adler and his team determined both lobes appear to be of deltaic origin and the largest yet found on Mars…. [More at links]