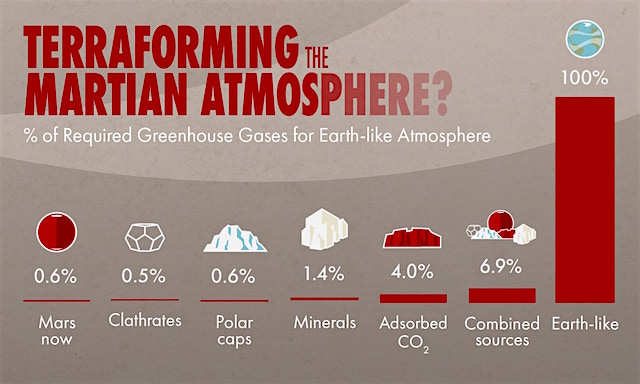 A new study of the quantity of carbon dioxide on Mars has compiled a planet-wide inventory of the CO2 it holds in all its accessible reservoirs: atmosphere, ice, and locked up in surface carbonate rocks and other potential sources.

The results of the inventory strongly discourage a mainstay of science fiction stories as well as an often-suggested scheme for human settlement: terraforming the Red Planet to produce a thick enough atmosphere for liquid water to exist on the surface.

According to the researchers Mars simply doesn’t have enough carbon dioxide, even taking together all the known and acessible reservoirs. It isn’t even close.

Say Bruce Jakosky and Christopher Edwards in a new paper published in Nature Astronomy, “Releasing all the readily acceessible CO2 would merely triple the current atmosphere. And that would still amount to only one-fiftieth of what’s needed.”

The scientists explain that, “Even if enough CO2 were to be available, it would not be feasible to mobilize it. Doing so would require processing a major fraction of the surface rocks and materials, analogous to regional- or planet-scale strip mining.”