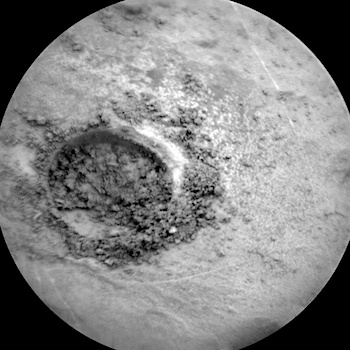 Sols 2124-26, July 27, 2018, update by MSL scientist Ryan Anderson: Our attempt at drilling the target “Ailsa Craig” was partly successful: the drill behaved exactly as it was supposed to, but unfortunately we weren’t able to drill very deep. The rock here is just too hard! Since we didn’t get a nice deep drill hole, the plan for the weekend is to do some final observations at this location and then move on another location to try again.

The science block on Sol 2124 starts with a ChemCam passive observation of the pulverized rock tailings from our shallow drill hole. That will be followed by an “active” (laser zapping) observation of the vein target “LamLash Bay” accompanied by Mastcam multispectral images. Later in the afternoon, Mastcam and Navcam will do some atmospheric observations to monitor the dust levels as the planet-encircling… [More at link]