Mars Express: From worry to water 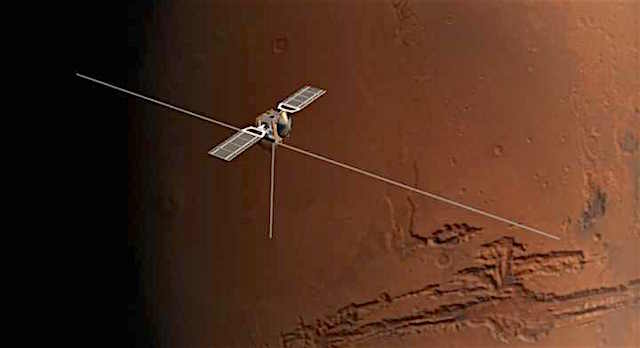 In 2004, a year after Europe’s first mission to Mars was launched, the flight dynamics team at ESA’s operations centre encountered a serious problem. New computer models showed a worrying fate for the Mars Express spacecraft if mission controllers continued with their plans to deploy its giant MARSIS (Mars Advanced Radar for Subsurface and Ionosphere Sounding) radar.

This extremely sensitive radar instrument spans 40 metres across once fully extended, making it longer than a Space Shuttle orbiter and was built with the direct intention of finding water beneath Mars’ surface… Two ‘radar booms’, 20-metre long hollow cylinders, 2.5 centimetres in diameter, and one 7-metre boom, were folded up in a box like a concertina. Once the box was opened, all of the stored elastic energy from the glass fibre booms would be released, a little like a jack-in-the-box, and they would lock into a straight line.

New and updated computer models, however, showed that these long rods would swing back and forth upon release with an even greater amplitude than previously thought, potentially coming into close contact with the delicate parts of the Mars Express body. (…)

On 25 July 2018, fifteen years after its launch, it was confirmed that data from years of Mars Express’ observations were telling us something remarkable. Hidden beneath Mars’ south pole is a pond of liquid water, buried under layers of ice and dust.

The presence of liquid water at the base of the polar ice caps had long been suspected, but until now evidence from MARSIS had remained inconclusive. It has taken the persistence of scientists working with this subsurface-probing instrument over years, developing new techniques in order to collect as much high-resolution data as possible to confirm such an exciting conclusion. [More at link]