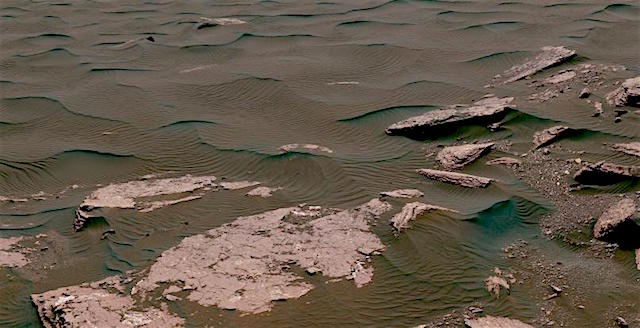 The Bagnold Dunes in Southern Summer: Active Sediment Transport on Mars Observed by the Curiosity Rover

•  Curiosity’s imaging campaigns in the Bagnold Dune Field reveal that impact ripples migrate up to ∼3 cm/sol during southern summer.
• Impact ripples generally migrated towards the southwest within a 70 degree range about their mean migration direction.
• Sand-flux estimates are consistent with low-flux saltation occurring below the fluid threshold of sand transport.

A wealth of orbital images have revealed that wind is actively moving sand on the surface of Mars; landed instruments enable a closer look at these processes. Images acquired during southern summer by the Curiosity rover in Gale crater revealed high levels of wind activity, in contrast to previous imaging done during southern winter. A majority of ripple migration occurs towards the southwest, with ripples moving up to 2.8 cm per day.

These findings are consistent with models that predict southern summer to be the windiest season at this location on Mars, with strong regional winds flowing over the northern crater rim and causing strong southwestward flow along the floor of the crater within the vicinity of the rover. Despite the fact that bedforms are active, models do not predict that the wind should be strong enough to initiate motion, which challenges our understanding of the physics of sediment transport under Martian conditions. [More at link]