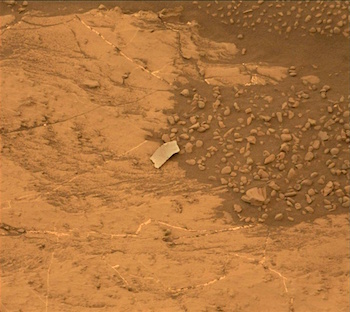 Sols 2143-44, August 16, 2018, update by MSL scientist Brittney Cooper: The planning day began with an interesting result from the previous plan’s ChemCam RMI analysis of a target that was referred to as “Pettegrove Point Foreign Object Debris” (PPFOD), and speculated to be a piece of spacecraft debris. In fact it was found to be a very thin flake of rock, so we can all rest easy tonight – Curiosity has not begun to shed its skin! Perhaps the target should have been given a different name befitting the theme of the current quadrangle in which Curiosity resides: “Rabhadh Ceàrr”, or “False Alarm” in Scottish Gaelic.

While indications of mechanical success from the previous plan’s CheMin analysis of the drill sample at the “Stoer” target were received, the data will not be down until late this evening, so the drill campaign is taking a small hiatus to do some remote observations in this two-sol plan. [More at link]