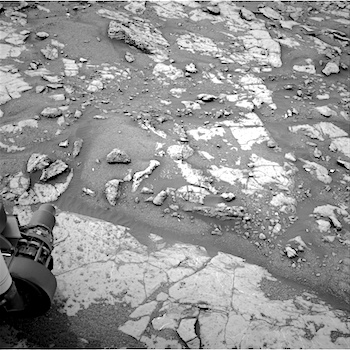 Sols 2145-46, August 20, 2018, update by MSL scientist Christopher Edwards: Unlike normal weekend plans for Curiosity that encompass three martian days, this plan only covers two. This “Soliday Sunday” isn’t really a day off for the rover like it implies, but instead allows the planning schedule on Earth and Mars to get back in sync. On Monday, the team returns to regular planning but there’s still some great science happening this weekend.

CheMin is continuing its analysis of the “Stoer” drill sample but it’s not the only instrument interested in getting a piece of the latest drill target. SAM, Curiosity’s mass spectrometer instrument, is going to receive a sample drop-off from the drill assembly in the weekend plan. However, the Evolved Gas Analysis (EGA) won’t actually be planned until Monday. Evolved Gas Analysis is a powerful technique that allows SAM to reveal… [More at link]