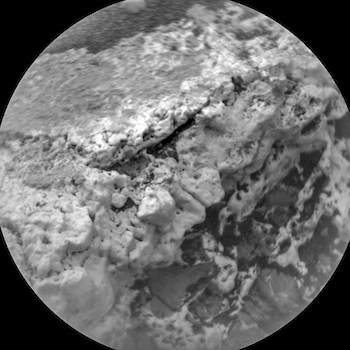 Sol 2149, August 22, 2018, update by MSL scientist Roger Wiens: With seventeen sampling holes and several test holes, you might imagine that Curiosity is creating a rather long and erratic golf course in Gale crater. After all, Alan Shepard shot a golf ball on the Moon. The first two martian sampling holes, at Yellowknife Bay, are several kilometers away from the third hole, at Kimberley, which is several kilometers from all the subsequent ones in the Murray formation. The distances between the first several holes might be too long for golf links on Earth, but maybe with reduced gravity and very little wind resistance, a mighty drive of over a kilometer might be possible. Unfortunately, the size of the holes drilled by Curiosity, at ~16 mm diameter, are too small for golf balls, which are > 41 mm diameter, so golf enthusiasts will have to wait a little longer to play on Mars. [More at link]