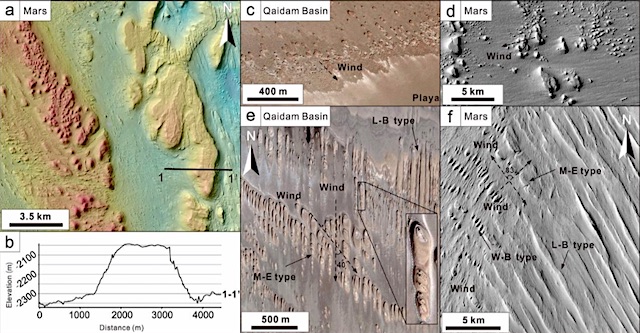 [Editor’s note: From a paper by Jiang Wang and eight co-authors recently published in the Journal of Geophysical Research.]

Geological Features and Evolution of Yardangs in the Qaidam Basin, Tibetan Plateau (NW China): A Terrestrial Analogue for Mars

• We conduct a comprehensive study of geomorphology and evolution processes of yardangs in the Qaidam Basin and their analogues on Mars.

• These yardangs have similar morphologic and geometric characteristics, and experienced a multi-stage evolution.

• The evolution processes may have been interrupted at some stages due to differences in rocks properties and/or the changes of environment.

The Qaidam Basin is the largest yardang field in China. In this study, we investigate the distributions, morphological types, and sizes of these yardangs. We attempt to explore their origins and explain their evolution processes.

Based on their morphologies and distributions, we have identified 11 different types of yardang and sort them into four main groups. We find both their spatial distribution and orientation are controlled by local topography and prevailing wind direction. Their main orientations are northwest to north‐northeast in the northwestern basin, while approximately West to East in the central eastern basin. Yardangs in the Qaidam Basin are mainly eroded by wind.

We propose a four‐step evolution model to explain their formation processes. Similar yardangs on Mars are also observed, such as those within the Medusae Fossae Formation and Gale Crater. We find that yardangs on Mars show morphologic and geometric characteristics similar to those in the Qaidam Basin, indicating they may have experienced similar evolution processes. [More at link]