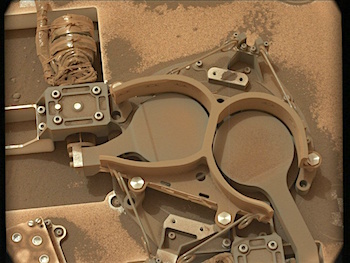 Sol 2150, August 24, 2018, update by MSL scientist Roger Wiens: The big question coming into today was whether to re-do the SAM analysis or not. Now that the drill is being operated with the feed immobile in the extended position, the portions (amount of drill tailings) that are delivered to CheMin and SAM are less accurate than before. Duluth was the only previous drill attempt to reach sampling depth with the feed immobile. In that case several attempts were made to deliver proper portions to the in-situ instrument funnels.

The accompanying image [above] shows the positions of the SAM inlets on the rover deck, with the covers closed. The rover team seems to have learned quite quickly how to get the portions to these instruments, and this morning we learned that SAM completed a successful analysis. The other part of the decision was whether to repeat SAM’s analysis with different parameters, but the team decided not to do so at this… [More at link]