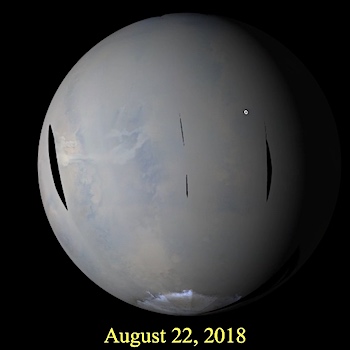 Afternoon skies became less dusty as dust continued to settle out of the atmosphere this past week. In the middle of the week, local dust storm activity returned to Noachis Terra. During that time, a dust storm pushed southward over Xanthe Terra — later lofting a dust cloud over western Valles Marineris. Small transient storms were spotted along the seasonal south polar ice cap edge throughout the week. For most afternoons… [More at link, including video]