Searching for signs of marsquakes 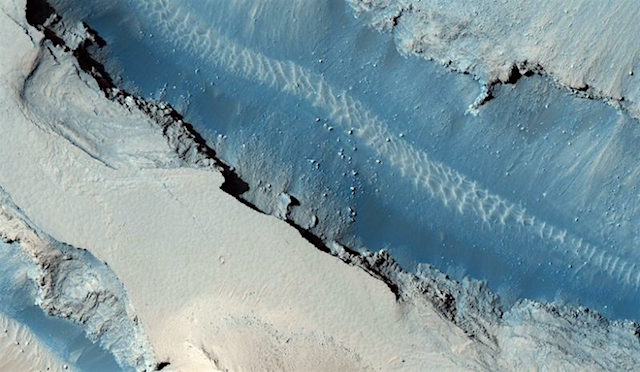 Rovers and landers have been studying Mars’s surface for decades, but the inner workings of the Red Planet are still mysterious. No one yet knows for sure what sort of seismic activity rocks the Red Planet. That’s not for lack of trying: As far back as the 1970s, NASA attempted to detect “marsquakes” in much the same way that tremors on Earth are detected—with seismometers aboard the twin Viking landers. But the instruments aboard the landers either failed or collected compromised data.

Yet, despite the lack of confirmed quakes so far, researchers suspect—based on fault maps of the planet—that Mars likely has more tremors than the Moon but fewer than Earth. This suspicion may be confirmed in November 2018 with the first seismic-focused mission to Mars, the Interior Exploration using Seismic Investigations, Geodesy and Heat Transport (InSight) lander.

[Reporting in the Journal of Geophysical Research, Peter Grindrod and colleagues] took a different approach: The team studied images of Mars’s surface over nearly a decade to look for changes that might have been caused by marsquakes. The researchers used images of Mars’s surface from the High Resolution Imaging Science Experiment (HiRISE) and applied Co-registration of Optically Sensed Images and Correlation (COSI-Corr)—software that has been validated to track terrestrial glaciers, landslides, and quakes on Earth, as well as dune movement on Mars itself—to hunt for signs of displacement near fault zones.

The researchers focused on the Cerberus Fossae fault system, the youngest fault system on the Red Planet and thus the most likely to still be active. They used the average coregistration performance of each study image to determine that this method should be able to detect fault slip rates of 0.1–10 millimeters a year…. [More at links]