The largest delta on Mars? 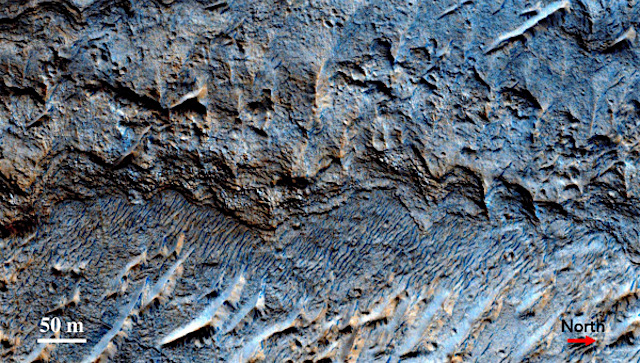 Planetary Geomorphology Image of the Month, September 1, 2018: Jacob Adler (Arizona State University). Ancient river deltas are found in many locations on Mars [see Di Achile & Hynek, 2010 and references therein], and are formed as sediment drops out of suspension in water as it approaches a wider shoreline of a lake, sea, or (debatably) an ocean.

Some proposed deltas on Mars are found in closed basins (e.g. an impact crater) away from the Martian dichotomy boundary, implying an ancient climate during which the crater ponded with water [e.g. Eberswalde or Jezero]. Occasionally, inlet and outlet river valleys are seen at different elevations along the crater rim, lending further evidence to the hypothesis that the crater filled with liquid water at least up to the outlet elevation.

Deltas found in open basins, on the other hand, imply a larger body of standing water, and Mars scientists look for other clues to support the deltaic rather than alluvial fan formation mechanism. In our recent papers, we tested whether the Hypanis fan-shaped deposit (Image 1) could be a delta, and discussed whether this supports the hypothesis that there was once a large sea or ocean in the Northern plains of Mars… [More at link]