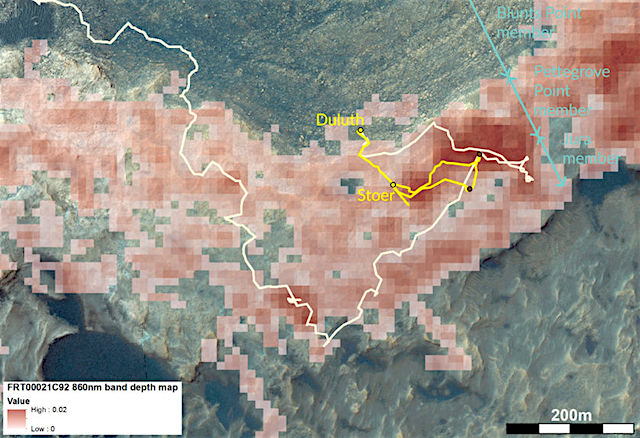 September 6, 2018: Three Tries to Successful Drill Atop Vera Rubin Ridge: Heedless of the (now-dissipating) dust storm, Curiosity has achieved its first successful drill into rocks that form the Vera Rubin ridge, and is hopefully on the way to a second. It took three attempts for Curiosity to find a soft enough spot, with Voyageurs and Ailsa Craig being too tough, but Stoer proved obligingly soft on sol 2136. The rover delivered samples to both of its analytical laboratory instruments before driving away.

There have been lots and lots of images landing on Earth in the last several weeks, as Curiosity is ramping up data relay through MAVEN and ExoMars Trace Gas Orbiter. Once InSight lands, Curiosity will have to give up most of its Mars Reconnaissance Orbiter data relay to the lander — InSight’s landing site is just a couple hundred kilometers north of Curiosity, so both missions want the same data relay passes as the polar-orbiting spacecraft passes overhead. For Curiosity, switching to MAVEN and ExoMars relay can replace the volume, but not the rhythmic repeatability, of Mars Reconnaissance Orbiter’s twice-a-day-like-clockwork relay sessions. Until InSight lands, though, Curiosity gets to hog all the data volume — so the team is taking advantage of the bounty while it lasts… [More at link]