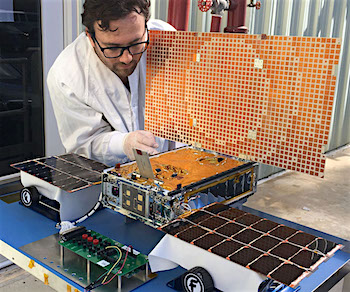 Twenty years ago, CubeSats — a class of boxy satellites small enough to fit in a backpack — were used by universities as a teaching aid. Simpler, smaller and cheaper than traditional satellites, they’ve made space more accessible to private companies and science agencies.

This summer, NASA has been flying the first two next-generation CubeSats to deep space. They’re currently on their way to Mars, trailing thousands of miles behind the InSight spacecraft. InSight and its CubeSat tag-alongs are already more than halfway to the Red Planet.

The mini-mission, called Mars Cube One (MarCO), has already proved this class of spacecraft can survive the deep-space environment. It will next test the use of miniaturized communication technology to relay data when InSight attempts to land in November. Relaying landing data is one of the jobs of NASA’s orbiters, which will record InSight’s descent; engineers learn more from every landing attempt. MarCO will test whether this technology can ably perform the relay job for future missions… [More at link]