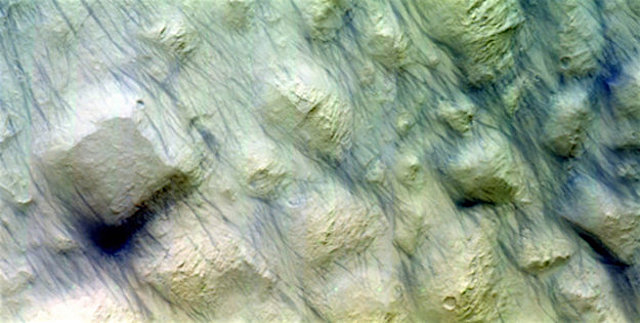 Astronauts on a mission to Mars would be exposed to at least 60% of the total radiation dose limit recommended for their career during the journey itself to and from the Red Planet, according to data from the ESA-Roscosmos ExoMars Trace Gas Orbiter being presented at the European Planetary Science Congress, EPSC, in Berlin, Germany, this week.

The orbiter’s camera team are also presenting new images of Mars during the meeting. They will also highlight the challenges faced from the recent dust storm that engulfed the entire planet, preventing high-quality imaging of the surface.

The Trace Gas Orbiter began its science mission at Mars in April, and while its primary goals are to provide the most detailed inventory of martian atmospheric gases to date – including those that might be related to active geological or biological processes – its radiation monitor has been collecting data since launch in 2016.

The Liulin-MO dosimeter of the Fine Resolution Epithermal Neutron Detector (FREND) provided data on the radiation doses recorded during the orbiter’s six-month interplanetary cruise to Mars, and since the spacecraft reached orbit around the planet.

On Earth, a strong magnetic field and thick atmosphere protects us from the unceasing bombardment of galactic cosmic rays, fragments of atoms from outside our Solar System that travel at close to the speed of light and are highly penetrating for biological material.

In space this has the potential to cause serious damage to humans, including radiation sickness, an increased lifetime risk for cancer, central nervous system effects, and degenerative diseases, which is why ESA is researching ways to best protect astronauts on long spaceflight missions.

The ExoMars measurements cover a period of declining solar activity, corresponding to a high radiation dose. Increased activity of the Sun can deflect the galactic cosmic rays, although very large solar flares and eruptions can themselves be dangerous to astronauts.

“One of the basic factors in planning and designing a long-duration crewed mission to Mars is consideration of the radiation risk,” says Jordanka Semkova of the Bulgarian Academy of Sciences and lead scientist of the Liulin-MO instrument… [More at link]