Curiosity update: Tell us more, we want to help! 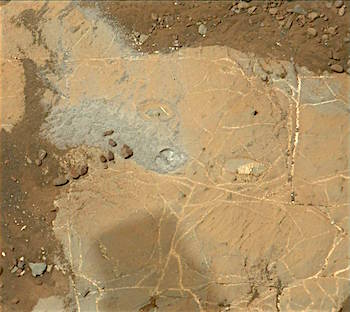 Sols 2175-76, September 19, 2018, update by MSL project scientist Ashwin Vasavada: Over the past few days, engineers here at JPL have been working to address an issue on Curiosity that is preventing it from sending much of the science and engineering data stored in its memory. The rover remains in its normal mode and is otherwise healthy and responsive.

The issue first appeared Saturday night while Curiosity was running through the weekend plan. Besides transmitting data recorded in its memory, the rover can transmit “real-time” data when it links to a relay orbiter or Deep Space Network antenna. These real-time data are transmitting normally, and include various details about the rover’s status. Engineers are expanding the details the rover transmits in these real-time data to better diagnose the issue. Because the amount of data coming down is limited, it might take some time for the engineering team to diagnose the problem.

On Monday and Tuesday, engineers discussed which real-time details would be the most useful to have. They also commanded the rover to turn off science instruments that were still on, since their data are not being stored. They’re also preparing to use the rover’s backup computer in case they need to use it to diagnose the primary computer. That backup computer was the rover’s primary one until Sol 200, when it experienced both a hardware failure and software issue that have since been addressed… [More at link]

Note from JPL: These updates may be less frequent until science operations resume.