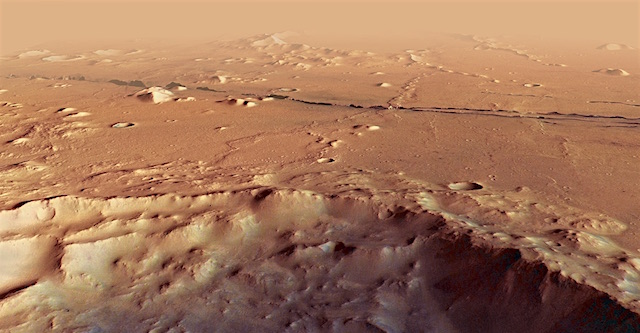 These prominent trenches were formed by faults that pulled the planet’s surface apart less than 10 million years ago. The images were taken by ESA’s Mars Express on 27 January, and capture part of the Cerberus Fossae system in the Elysium Planitia region near the martian equator.

The fossae – meaning ‘ditches’ or ‘trenches’ in Latin – stretch for more than 1000 kilometres from the northwest to the southeast. They cut through impact craters and hills along the way, as well as 10 million year old volcanic plains, indicating the relative youth of their formation.

They vary in width, typically from a few tens of metres to over a kilometre wide, and are thought to be tectonic features originating from faults that stretch the upper layers of the surface apart.

They could be linked to injections of lava at depth deforming the surface above, perhaps originating from the trio of volcanoes that are located to the northwest… [More at link]