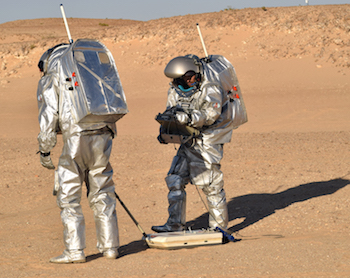 Analogue astronauts have successfully trialed a radar that could help future Mars explorers identify where to dig for water. ScanMars is an Italian experiment that was used to identify subsurface water features in the Mars-like Dhofar region of Oman during the AMADEE-18 analogue mission in February 2018. The results will be presented by Alessandro Frigeri of the Istituto Nazionale di Astrofisica (INAF) at the European Planetary Science Congress (EPSC) 2018 in Berlin.

The ScanMars ground penetrating radar has been developed by a group of Italian scientists from INAF’s Istituto di Astrofisica e Planetologia Spaziali and the University of Perugia. The radar has an appearance similar to a metal detector, with a pack of instrumentation pulled along the ground at the end of a pole. The radar investigates the subsurface by transmitting and receiving radio-wave impulses into the ground. Regions with different geological characteristics react in different ways to the radio-waves, and enable an image of the subsoil structure and boundaries to be built up from the reflected signals. [More at links]