[Ed. note: The video shows a presentation on September 20, 2018, by MAVEN principal investigator Bruce Jakosky providing an update on the latest data from the mission. The story excerpted below is on the MAVEN mission website.]

Today [September 21], NASA’s MAVEN spacecraft celebrates four years in orbit studying the upper atmosphere of the Red Planet and how it interacts with the Sun and the solar wind. To mark the occasion, the team has released a selfie image of the spacecraft at Mars.

“MAVEN has been a tremendous success,” said Bruce Jakosky, MAVEN principal investigator from the University of Colorado Boulder. “The spacecraft and instruments continue to operate as planned, and we’re looking forward to further exploration of the Martian upper atmosphere and its influence on climate.”

MAVEN has obtained a selfie image [below], looking at ultraviolet wavelengths of sunlight reflected off of components of the spacecraft. The image was obtained with the Imaging Ultraviolet Spectrograph (IUVS) instrument that normally looks at ultraviolet emissions from the Martian upper atmosphere. The IUVS instrument is mounted on a platform at the end of a 1.2-m boom (its own “selfie stick”), and by rotating around the boom can look back at the spacecraft. The selfie was made from 21 different images, obtained with the IUVS in different orientations, that have been stitched together… [More at links] 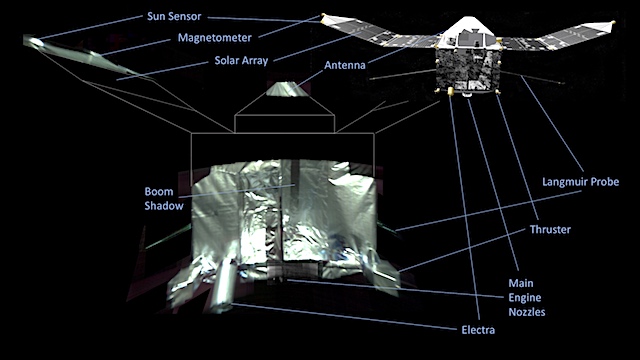