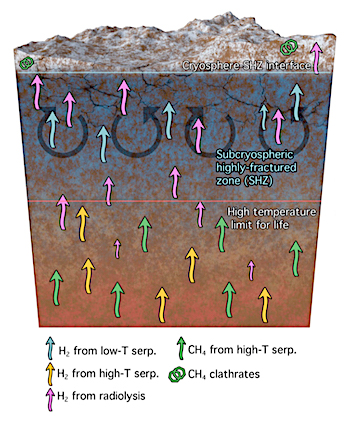 A new study shows that the breakdown of water molecules trapped in ancient Martian rocks likely produced enough chemical energy to sustain microorganisms for hundreds of millions of years beneath the Red Planet’s surface. (…)

“We showed, based on basic physics and chemistry calculations, that the ancient Martian subsurface likely had enough dissolved hydrogen to power a global subsurface biosphere,” said Jesse Tarnas, a graduate student at Brown University and lead author of a study published in Earth and Planetary Science Letters. “Conditions in this habitable zone would have been similar to places on Earth where underground life exists.”

Earth is home to what are known as subsurface lithotrophic microbial ecosystems — SliMEs for short. Lacking energy from sunlight, these subterranean microbes often get their energy by peeling electrons off of molecules in their surrounding environments. Dissolved molecular hydrogen is a great electron donor and is known to fuel SLiMEs on Earth.

This new study shows that radiolysis, a process through which radiation breaks water molecules into their constituent hydrogen and oxygen parts, would have created plenty of hydrogen in the ancient Martian subsurface. The researchers estimate that hydrogen concentrations in the crust around 4 billion years ago would have been in the range of concentrations that sustain plentiful microbes on Earth today. (…)

“People have a conception that a cold early Mars climate is bad for life, but what we show is that there’s actually more chemical energy for life underground in a cold climate,” Tarnas said. “That’s something we think could change people’s perception of the relationship between climate and past life on Mars.” [More at links]

This entry was posted in Reports and tagged life, microbial life, subsurface life. Bookmark the permalink.