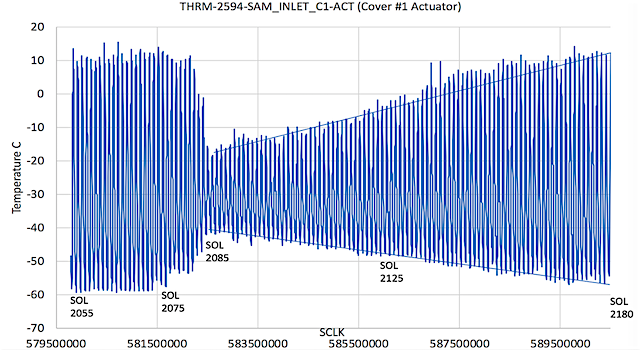 NASA’s Mars Reconnaissance Orbiter (MRO) provided the earliest insights on May 30 when it observed an accumulation of dust in the atmosphere near Perseverance Valley, where NASA’s Opportunity rover is exploring.

The increasingly hazy storm, the biggest since 2007, forced Opportunity to shut down science operations by June 8, given that sunlight couldn’t penetrate the dust to power the rover’s solar panels. Scientists are anxiously waiting for the roving explorer to regain power and phone home.

Meanwhile, on June 5, evidence quietly materialized on the other side of the globe that the storm was growing and beginning to affect Gale Crater, the research site of NASA’s Curiosity rover. (The storm was officially classified as global on June 20.)

It came from an unexpected source: an actuator, or motor, that powers a lid to a funnel that takes in samples of powdered Martian rock dropped in by Curiosity’s drill. The samples then undergo chemical analysis by the portable Sample Analysis at Mars (SAM) chemistry lab, designed by scientists at NASA’s Goddard Space Flight Center in Greenbelt, Maryland, and built into Curiosity’s belly.

“All my charts showed the dust storm effect on the actuator because it’s exposed; it’s sitting out there on the rover deck,” said Prats. “All of a sudden, I saw the daytime temperature drop really quickly.”

At night, too, said Prats, he saw temperatures rising above normal levels. This happens during a dust storm because less sun penetrates the dusty atmosphere during the day, cooling the surface of the planet, while at night, the warmer, dusty atmosphere heats the ground. Other weather tools on the explorer, such as the Rover Environmental Monitoring Station, which measures air temperature, atmospheric pressure, and other environmental conditions, were also beginning to indicate accumulating dust… [More at link]