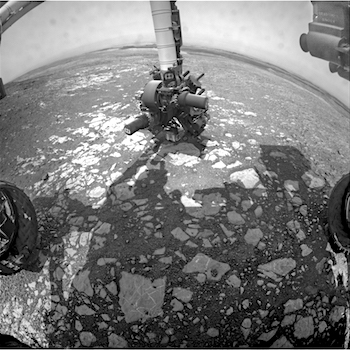 Sol 2204, October 19, 2018, update by MSL scientist Sarah Lamm: Contrary to the “frightening” title, the Curiosity team is excited that science operations are starting to resume!

The real fright was when Curiosity had an anomaly on Sol 2172 which affected its memory. Since then, the engineering team has continued to diagnose the anomaly and plan the recovery, including taking the first images with the A-side engineering cameras that haven’t been used since 2013! Thanks to our hard-working engineers, Curiosity is ready for limited science operations while the anomaly work continues.

Curiosity has been at the (sadly) unsuccessful “Inverness” drill site since the anomaly. Curiosity is still exploring the gray Jura member on Vera Rubin Ridge. The uplink plan for Sol 2204 includes the use of RAD, REMS, and DAN (active and passive).

RAD detects high-energy radiation on the Martian surface. RAD’s data will help shape future human mission to Mars by letting us know how much shielding from radiation future Mars astronauts will need to… [More at link]