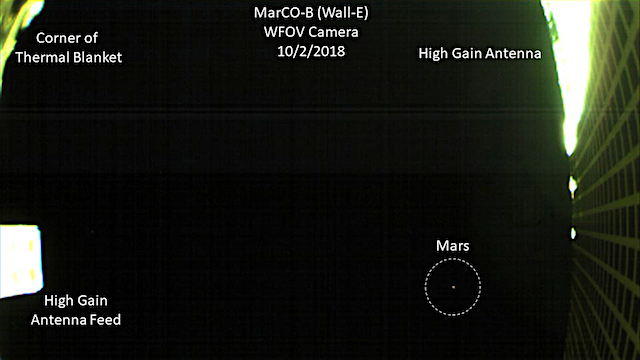 ASA’s MarCO mission was designed to find out if briefcase-sized spacecraft called CubeSats could survive the journey to deep space. Now, MarCO — which stands for Mars Cube One — has Mars in sight.

One of the twin MarCO CubeSats snapped this image of Mars on Oct. 3 – the first image of the Red Planet ever produced by this class of tiny, low-cost spacecraft. The two CubeSats are officially called MarCO-A and MarCO-B but nicknamed “EVE” and “Wall-E” by their engineering team.

A wide-angle camera on top of MarCO-B produced the image as a test of exposure settings. The MarCO mission, led by NASA’s Jet Propulsion Laboratory in Pasadena, California, hopes to produce more images as the CubeSats approach Mars ahead of Nov. 26. That’s when they’ll demonstrate their communications capabilities while NASA’s InSight spacecraft attempts to land on the Red Planet. (The InSight mission won’t rely on them, however; NASA’s Mars orbiters will be relaying the spacecraft’s data back to Earth.)

This entry was posted in Reports and tagged CubeSats, MarCO, Mars Cube One. Bookmark the permalink.