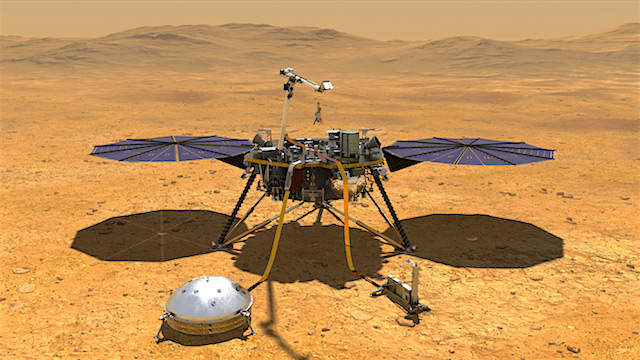 After touching down in November, NASA’s InSight spacecraft will spread its solar panels, unfold a robotic arm … and stay put. Unlike the space agency’s rovers, InSight is a lander designed to study an entire planet from just one spot.

This sedentary science allows InSight to detect geophysical signals deep below the Martian surface, including marsquakes and heat. Scientists will also be able to track radio signals from the stationary spacecraft, which vary based on the wobble in Mars’ rotation. Understanding this wobble could help solve the mystery of whether the planet’s core is solid.

Here are five things to know about how InSight conducts its science.

1. InSight Can Measure Quakes Anywhere on the Planet

Quakes on Earth are usually detected using networks of seismometers. InSight has only one – called SEIS (Seismic Experiment for Interior Structure) – so its science team will use some creative measurements to analyze seismic waves as they occur anywhere on the planet.

SEIS will measure seismic waves from marsquakes and meteorite strikes as they move through Mars. The speed of those waves changes depending on the material they’re traveling through, helping scientists deduce what the planet’s interior is made of.

Seismic waves come in a surprising number of flavors. Some vibrate across a planet’s surface, while others ricochet off its center. They also move at different speeds. Seismologists can use each type as a tool to triangulate where and when a seismic event has happened…. [More at link]