Closer to solving the methane mystery 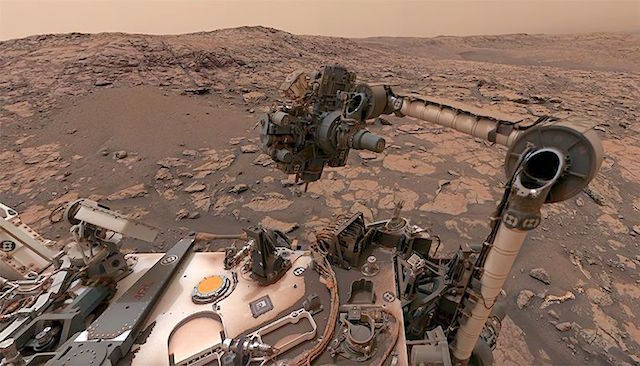 Planetary scientists are getting closer to solving the puzzle of methane on Mars.

New calculations could help to explain why NASA’s Curiosity rover detects peaks of methane gas in the Martian atmosphere during the planet’s northern summer. As winter gives way to spring, the idea goes, the Sun’s heat begins to warm the soil — allowing methane to percolate up from the ground and into the atmosphere, said John Moores, a planetary scientist at York University in Toronto, Canada. He presented the work at a planetary-sciences meeting on 24 October 2018.

Curiosity’s methane measurements have been tantalizing researchers for years. The rover, which landed near Mars’s equator in Gale crater in 2012, at first found mysterious spikes in atmospheric methane during the northern spring. Earlier this year, team scientists reported that methane levels waxed and waned with the seasons, peaking in northern summer.

Finding methane in Mars’s atmosphere is intriguing because chemical reactions should destroy the gas after about 300 years. Its presence today suggests that something on the planet is still sending the gas into the atmosphere. The source could be geological processes, such as reactions between certain types of rock and water — or, more intriguingly, buried microbes or other forms of life. Most of the methane in Earth’s atmosphere comes from living things… [More at links]