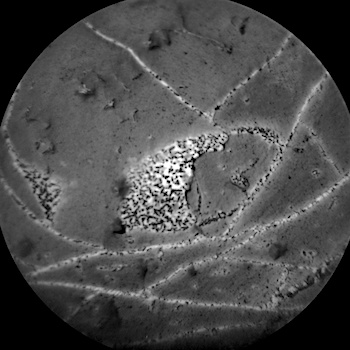 Sol 2218, November 1, 2018, update by MSL scientist Sarah Lamm: Curiosity had a good Halloween because it had resumed contact science. Today, Curiosity will have a targeted science block, drive, and then have an untargeted science block. MAHLI will take images of the “Lossiemouth” target before the drive. ChemCam has two planned targets before the drive: “Milton Ness” and “Grange 2218.” Milton Ness is a target to capture more of the vein material and some bedrock, too. We are taking more measurements of Grange so we have more information on the dark inclusions. There is also scheduled Mastcam imagery for each ChemCam target.

After these science activities, we will be headed toward an area in the grey Jura member called “Lake Orcadie.” This would be the first time that Curiosity has driven in six weeks. This will only be a test drive to ensure the software and mechanics are working properly. Curiosity was at Lake Orcadie before, back on sol 1977. We had tried to drill at Lake Orcadie before, using our new drilling method, but it was not successful. Then we planned to drive back to Lake Orcadie on sol 2173, but there was an anomaly on sol 2172… [More at link]