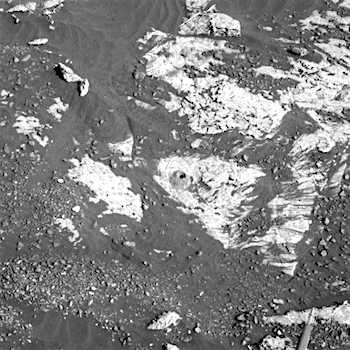 Sol 2225, November 9, 2018, update by MSL scientist Claire Newman: Tosol we received confirmation that Curiosity’s drill yestersol was successful, as shown in this Navcam image of the “Highfield” target – our eighteenth drill hole in the martian surface!

Not quite a ‘hole in one,’ as we tried to sample the same gray Jura rock type about 50 sols ago, but we finally have a sample of our highest value target on Vera Rubin Ridge. Rather than retreat to the club house for a well-earned celebration, however, Curiosity and the team stayed busy in Sol 2225, doing Mastcam and ChemCam imaging of the new drill hole and tailings. This was in preparation for the weekend plan, in which there’ll be further imaging and ChemCam LIBS on the drill hole, and samples will be dropped off to CheMin for further analysis.

In addition, there’s a packed program of environmental science over the next few sols, now that we’re back to full science operations. The global dust storm may have decayed, but we’re still interested in seeing whether the post-storm atmosphere differs compared to the same season in previous Mars years… [More at link]