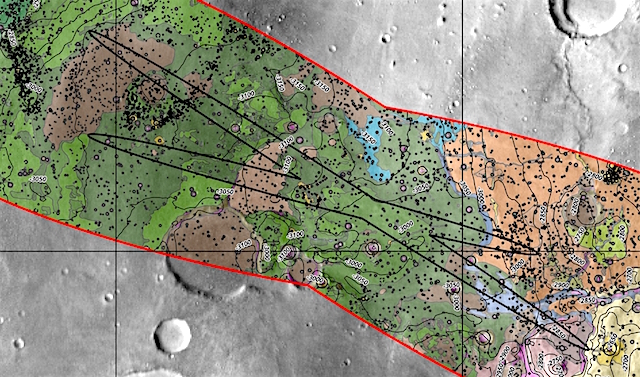 The ExoMars Landing Site Selection Working Group has recommended Oxia Planum as the landing site for the ESA-Roscosmos rover and surface science platform that will launch to the Red Planet in 2020. The proposal will be reviewed internally by ESA and Roscosmos with an official confirmation expected mid-2019. (…)

While the ExoMars Trace Gas Orbiter, launched in 2016, began its science mission earlier this year to search for tiny amounts of gases in the atmosphere that might be linked to biological or geological activity, the rover will drive to different locations and drill down to two metres below the surface in search of clues for past life preserved underground. It will relay its data to Earth through the Trace Gas Orbiter.

Both landing site candidates – Oxia Planum and Mawrth Vallis – preserve a rich record of geological history from the planet’s wetter past, approximately four billion years ago. They lie just north of the equator, with several hundred kilometres between them, in an area of the planet with many channels cutting through from the southern highlands to the northern lowlands. Since life as we know it on Earth requires liquid water, locations like these include many prime targets to search for clues that may help reveal the presence of past life on Mars.

“With ExoMars we are on a quest to find biosignatures. While both sites offer valuable scientific opportunities to explore ancient water-rich environments that could have been colonised by micro-organisms, Oxia Planum received the majority of votes,” says ESA’s ExoMars 2020 project scientist Jorge Vago… [Much more at link]