Gathering the rocks of Meridiani Planum 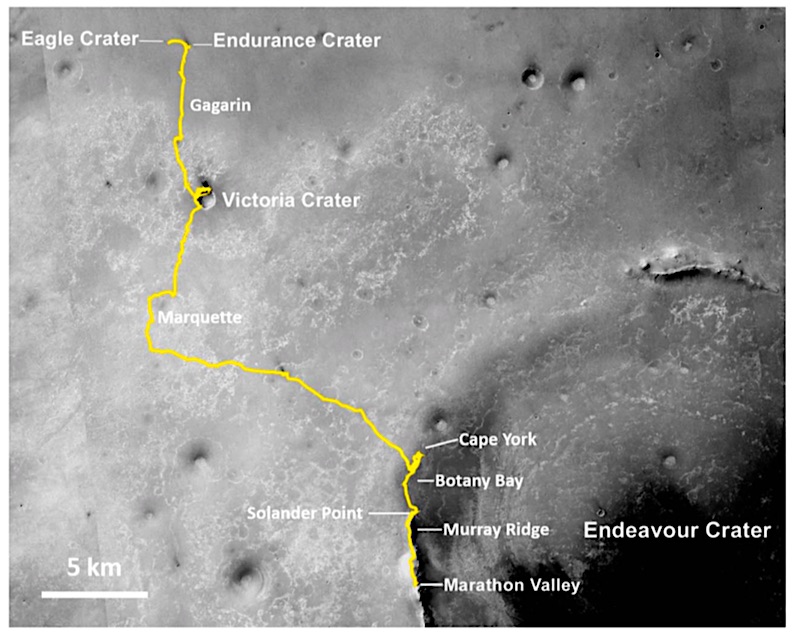 [Editor’s note: From a paper by Michael Bouchard and Bradley Joliff recently published in the Journal of Geophysical Research.]

The Mars Exploration Rover Opportunity has been exploring the surface of the red planet since 2004 and has returned a huge amount of images and information. Part of this information is a data set of several hundred rock and soil chemical compositions.

This paper presents a method to quantify how similar each of these compositions is to each other, and to the composition of meteorites that we know came from Mars. These mathematical similarities are checked by using what is known about the rocks from images taken by the rover and ongoing geologic analysis.

These comparisons have led to new interpretations about the relationships between various rocks and rock groupings along the rim of Endeavour crater, a 22-km-diameter crater explored by Opportunity.

From the paper’s conclusion (emphasis added): We have used a set of statistical approaches to examine potential relationships among rocks analyzed by the MER rover Opportunity, focusing on members that have been mapped according to four major geologic formations, the Burns formation sulfate sandstones of Meridiani Planum, the Shoemaker breccias on the remnant rim of Endeavour crater, the Grasberg formation, an onlapping unit between the Burns formation and Shoemaker breccias, and the Matijevic formation, which may represent pre-Endeavour crater deposits exposed in a window in one of the rim segments… [More at link]