InSight: What’s the sound of a Mars touchdown? 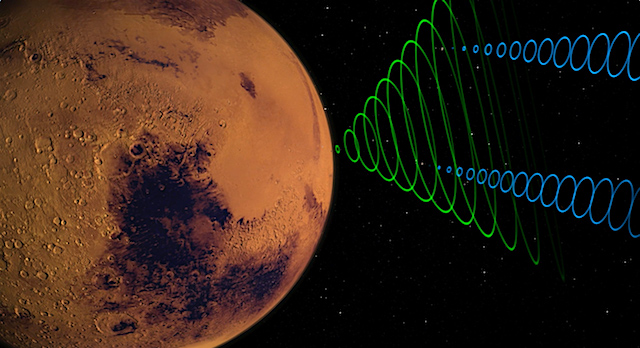 What’s the sound of a touchdown on Mars? If you’re at NASA’s Jet Propulsion Laboratory, it sounds like winning the Super Bowl: cheers, laughter and lots of hollering.

But in the minutes before that, NASA’s InSight team will be monitoring the Mars lander’s radio signals using a variety of spacecraft — and even radio telescopes here on Earth — to suss out what’s happening 91 million miles (146 million km) away.

Because these signals are captured by several spacecraft, they’re relayed to Earth in different ways and at different times. That means the mission team may know right away when InSight touches down, or they may have to wait up to several hours.

Here’s how NASA will be listening for the next Mars landing on Nov. 26.

As the InSight lander descends into Mars’ atmosphere, it will broadcast simple radio signals called “tones” back to Earth. Engineers will be tuning in from two locations: the National Science Foundation’s Green Bank Observatory in Green Bank, West Virginia and the Max Planck Institute for Radio Astronomy’s facility at Effelsberg, Germany. Their results will be relayed to Mission Control at JPL and engineers at Lockheed Martin Space in Denver…. [More at link]