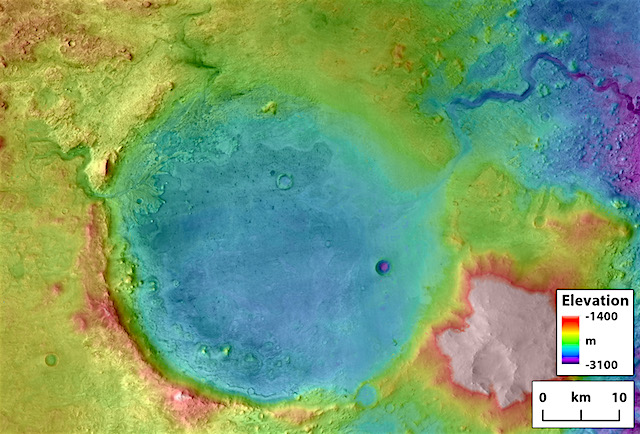 Today, most of the water on Mars is locked away in frozen ice caps. But billions of years ago it flowed freely across the surface, forming rushing rivers that emptied into craters, forming lakes and seas.

New research led by The University of Texas at Austin has found evidence that sometimes the lakes would take on so much water that they overflowed and burst from the sides of their basins, creating catastrophic floods that carved canyons very rapidly, perhaps in a matter of weeks.

The findings suggest that catastrophic geologic processes may have had a major role in shaping the landscape of Mars and other worlds without plate tectonics, said lead author Tim Goudge, a postdoctoral researcher at the UT Jackson School of Geosciences who will be starting as an assistant professor at the school in 2019.

“These breached lakes are fairly common and some of them are quite large, some as large as the Caspian Sea,” said Goudge. “So we think this style of catastrophic overflow flooding and rapid incision of outlet canyons was probably quite important on early Mars’ surface.”

The research was published Nov. 16 in the journal Geology. Co-authors include NASA scientist Caleb Fassett and Jackson School Professor and Associate Dean of Research David Mohrig. [More at links]

This entry was posted in Reports and tagged canyons, crater lakes, Jezero Crater. Bookmark the permalink.