Mars Express: Shaping the surface with water, wind, and ice 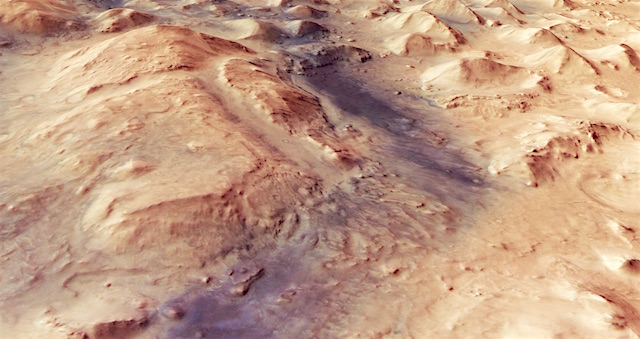 ESA’s Mars Express has imaged an intriguing part of the Red Planet’s surface: a rocky, fragmented, furrowed escarpment lying at the boundary of the northern and southern hemisphere.

This region is an impressive example of past activity on the planet and shows signs of where flowing wind, water and ice once moved material from place to place, carving out distinctive patterns and landforms as it did so. (…)

Northern Mars also displays large areas of smooth land, whereas the planet’s southern regions are heavily pockmarked and scattered with craters. This is thought to be the result of past volcanic activity, which has resurfaced parts of Mars to create smooth plains in the north – and left other regions ancient and untouched.

The star of this Mars Express image, a furrowed, rock-filled escarpment known as Nili Fossae, sits at the boundary of this north-south divide. This region is filled with rocky valleys, small hills, and clusters of flat-topped landforms (known as mesas in geological terms), with some chunks of crustal rock appearing to be depressed down into the surface creating a number of ditch-like features known as graben… [More at link]