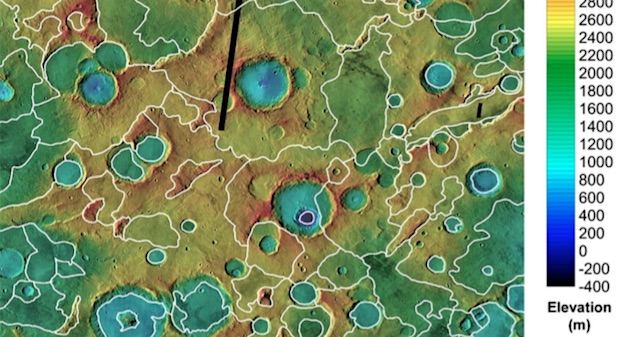 [Editor’s note: From a paper by Jon Cawley and Ross Irwin recently published in the Journal of Geophysical Research.]

Evolution of Escarpments, Pediments, and Plains in the Noachian Highlands of Mars

The development of these surface features suggests low‐intensity, intermittent erosion by running water and wind over hundreds of millions of years.

The key elements of this landscape evolution include weathering of Martian basaltic bedrock to finer‐grained sediments rather than coarse gravel, a lack of intense rainfall or snowmelt, minimal movement of loose material downslope, and processes that concentrated sediment in basins.

The blankets of material ejected from impact craters required little erosion to form stable and better sealed surfaces, which were later eroded by rivers during brief wetter epochs of Martian history. [More at link]