Curiosity update: Makin’ the most of it 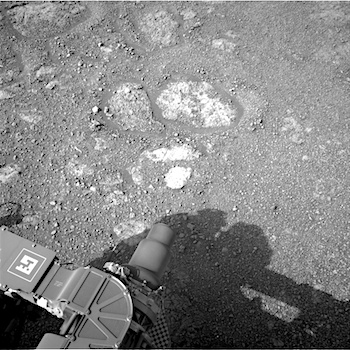 Sol 2257, December 11, 2018, update by MSL scientist Brittney Cooper: Even on Mars, where every second of Curiosity’s sol is planned, things don’t always go quite as expected. This morning we learned that Curiosity didn’t complete her planned drive yesterday and instead stopped at the mid-drive point. We had to decide whether to finish the remainder of the previously planned drive, or bump towards a red Jura candidate and potential drill target in today’s plan.

After some thoughtful discussion, we decided to make the most of where Curiosity ended up, and planned a bump toward the nearby target “Rock Hall” (located to the right of centre in the image above). Targeted ChemCam LIBS and Mastcam multispectral observations were then planned to characterize Rock Hall and confirm if it’s a member of the red Jura. Tosol’s bump will have Curiosity set up for drilling… [More at link]