Curiosity update: Go for drill on the red Jura! 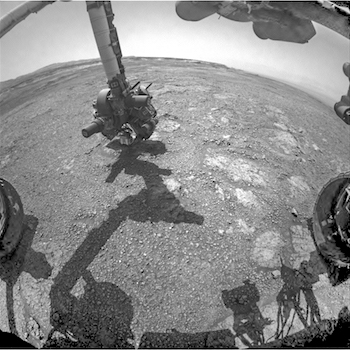 Sol 2260-62, December 17, 2018, update by MSL scientist Catherine O’Connell-Cooper: In our last plan, we carried out triage activities on the red Jura target, “Rock Hall,” including APXS of the target to determine composition, and engineering tests to assess the stability of the rock and its hardness, both of which would affect our ability to drill.

It was decided that this would be a suitable candidate, both geochemically and physically, so today’s plan will centre around the drilling of what will hopefully be our 19th drill sample for analysis on Mars!

On sol 2260, MAHLI will take a series of images to characterize locations chosen by the rover planners as the areas in which they would eventually like to dump excess sample generated by the drilling. The drilling itself will take place on the morning of the second sol (sol 2261)… [More at link]