InSight: Seismometer deployed on the ground 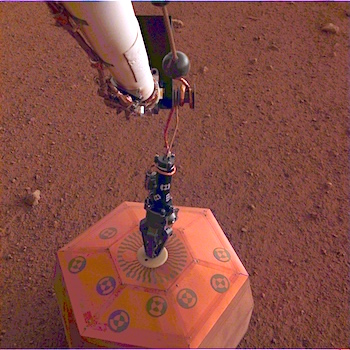 NASA’s InSight lander has deployed its first instrument onto the surface of Mars, completing a major mission milestone. New images from the lander show the seismometer on the ground, its copper-colored covering faintly illuminated in the Martian dusk. It looks as if all is calm and all is bright for InSight, heading into the end of the year.

“InSight’s timetable of activities on Mars has gone better than we hoped,” said InSight Project Manager Tom Hoffman, who is based at NASA’s Jet Propulsion Laboratory in Pasadena, California. “Getting the seismometer safely on the ground is an awesome Christmas present.”

The InSight team has been working carefully toward deploying its two dedicated science instruments onto Martian soil since landing on Mars on Nov. 26. Meanwhile, the Rotation and Interior Structure Experiment (RISE), which does not have its own separate instrument, has already begun using InSight’s radio connection with Earth to collect preliminary data on the planet’s core. Not enough time has elapsed for scientists to deduce what they want to know – scientists estimate they might have some results starting in about a year… [More at link]