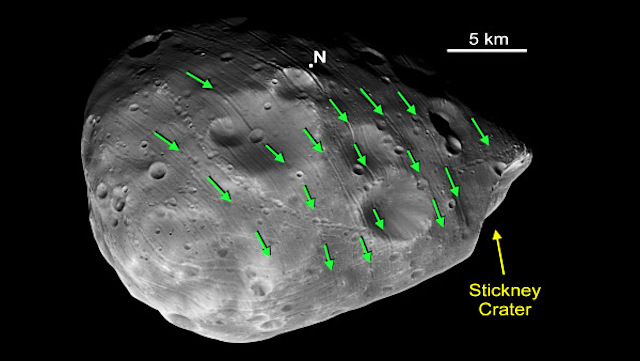 Planetary Geomorphology Image of the Month, January 1, 2019: Kenneth Ramsley (Brown University). All but one region of Phobos, the largest moon of Mars, is covered by hundreds of valley-like features, usually described as grooves. Most grooves are ~80 to ~200 meters wide and are found in groups of generally parallel members, or families [see Image 1].

Impact craters typically produce slow-moving boulders, and on Phobos there would be little gravity to halt their motions. Did boulders rolling across the surface of Phobos produce the grooves? To answer this question, using a computer model to calculate the fate of rolling boulders, we compare their motions to the geomorphology of the grooves… [More at link, including videos illustrating the computer model]