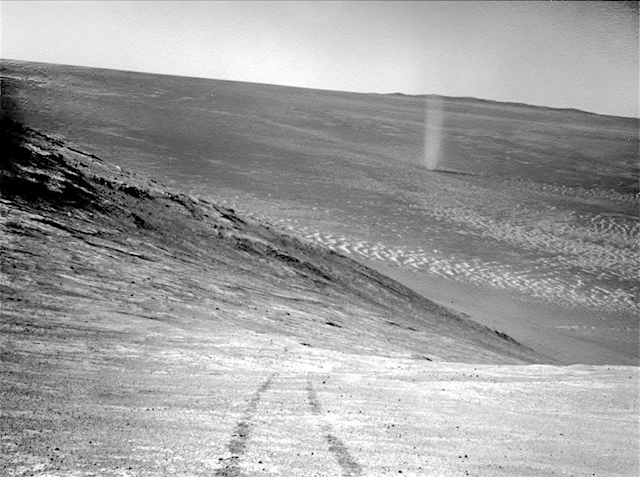 [Ed. note: Opportunity captured this Martian dust devil as it twisted through the landscape below her vista point high on Knudsen Ridge on March 31, 2016.]

January 6, 2019: Opportunity Still Silent, Team Still Hopeful: The Mars Exploration Rovers team and colleagues at NASA’s Deep Space Network (DSN) continued reaching out and listening for Opportunity throughout December, but all they heard was the sound of silence, again. It’s now been more than six and a half months that the longest-lived robot on another planet has been incommunicado.

After Opportunity sent a downlink June 10th, the “mother of all dust storms,” as some team members have described it, blotted out the Sun and stopped the solar-powered rover and the MER mission in their tracks. Shortly thereafter, the robot presumably shut down and went into a kind of hibernation as the massive storm pummeled Endeavour and then blustered its way around the planet.

Since then, DSN engineers have sent out more than 448 recovery commands and gotten not so much as one ‘beep’ back.

“Hopes remain high, the team remains vigilant, and we’re going to keep trying,” MER Principal Investigator Steve Squyres, of Cornell University, told The MER Update not long before the New Year rang in. “Opportunity is a tough rover and has pulled through a lot of tough things before. We’ll see what happens.”

As it stands now, NASA officials will consider the ops team’s next recommendation and reassess recovery efforts at some point in January. (…)

Summer continues to shine on Endeavour Crater and Opportunity’s site in Perseverance Valley. That means it’s still dust storm season. The good news is that no new threatening storm popped up in December and the dusty haze lingering in the sky over the 22-kilometer (13.7 mile) diameter crater was estimated as “about normal” for this time of year. The bad news is that the seasonal cycle of winds tucked within the greater dust storm season – which historically have served to clear accumulated dust on the rover’s solar arrays – either haven’t arrived in Perseverance or haven’t cleared enough dust from the rover’s solar arrays or something else has happened.

Once they do make contact with Opportunity, if they are able to do so, the MER engineers will have to address a mission clock fault, a low-power fault, and an up-loss timer fault. They are well prepared for that and just about anything else imaginable, except a broken part.

The ops team continued routine planning as they have since Opportunity checked into hibernation. “We’re still building the plans so all the tools still flow and the team stays in the routine of operations,” said Herman… [More at link]