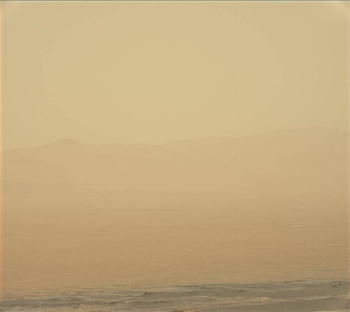 Sol 2292, January 17, 2019, update by MSL scientists Brittney Cooper and Claire Newman: Today was our last day at “Rock Hall,” so it was our final chance to get every last bit of science at this location. We had a 2.5 hour science block filled with Mastcam change detection imaging of the Rock Hall drill fines and alternating ChemCam RMI and LIBS observations of the Rock Hall dump pile, drill tailings, and target “St. Cyrus 2.” The ChemCam activities were followed by Mastcam documentation images of each of the aforementioned targets, and we also included a B-side computer diagnostic and an overnight APXS of the Rock Hall drill tailings.

Gale Crater has become a lot dustier in recent sols due to a regional dust storm in the southern hemisphere that was spotted by the Mars Climate Sounder team, so we added several extra environmental observations to see how this is affecting the atmosphere. These included extra measurements of the amount of dust above us (with the observation known as the “Mastcam tau”) and of visibility across the crater (with the “Navcam Line of Sight” and “Mastcam Crater Rim Extinction” observations)… [More at link]