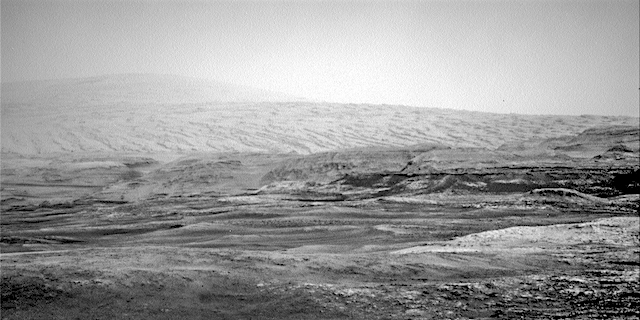 Sol 2298, January 22, 2019, update by MSL scientist Roger Wiens: Curiosity has moved for the first time since December 13, 2018. More importantly, Curiosity is moving to a new geological unit that we have so far called the “Clay-Bearing Unit” (CBU). The MSL rover team, following previous rover teams, has organized itself into different campaigns to explore different geological units. Organizers are nominated to lead these campaigns, and their job is to help coordinate among the competing interests of the different instrument teams, helping to make synergistic, collaborative discoveries. The organizers of the CBU campaign have been patiently waiting for their turn to lead the campaign. After all, their first meeting was well over a year ago, on October 3, 2017.

Curiosity has not actually arrived yet. The rover team is searching for the geological contact between bedrock of Vera Rubin Ridge and that of the CBU. The precise boundary is not clear from orbit, and it could also be a relatively gradual change as seen from rover images. To have the best chance at observing the transition, Curiosity is doing relatively short drives, interspersed with frequent observations by both remote and contact instruments, as the terrain allows… [More at link]