Geological evidence for a planet-wide groundwater system on Mars 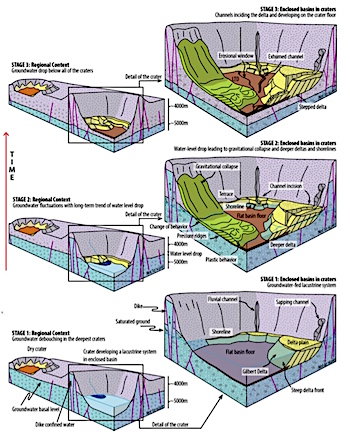 [Editor’s note: From a paper by Francesco Salese and four co-authors recently published in the Journal of Geophysical Research.]

Most previous studies on Mars relevant groundwater have proposed models, but few have looked at the geological evidence of groundwater upwelling in deep closed basins in the northern hemisphere equatorial region.

Geological evidence of groundwater upwelling in these deep basins is a key point that will help to validate present‐day models and to better constraint them in the future. Observations in the northern hemisphere show evidence of a planet‐wide groundwater system on Mars.

The elevations of these water‐related morphologies in all studied basins lie within the same narrow range of depths below Mars datum and notably coincide with the elevation of some ocean shorelines proposed by previous authors. [More at link]

This entry was posted in Reports and tagged aquifers, basins, groundwater. Bookmark the permalink.