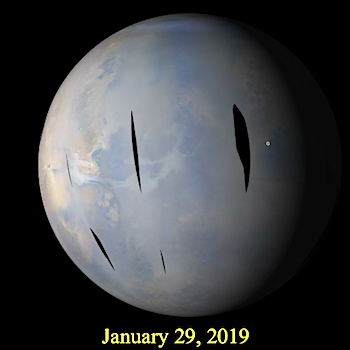 Conditions across Mars were similar to that of the previous week. Dust hazes remained present over many southern hemisphere regions. Looking to the northern hemisphere, a couple of dust storms associated with the north polar hood were observed north of Alba Patera and over northern Utopia near the end of the week. Lee wave clouds, known for their ripple like appearance, were spotted trailing behind Tempe Terra and among the Deuteronilus Mensae. Focusing on the tropics, optically-thin orographic water ice clouds were spotted above Arsia Mons (southernmost volcano of the Tharsis… [More at link, including video]